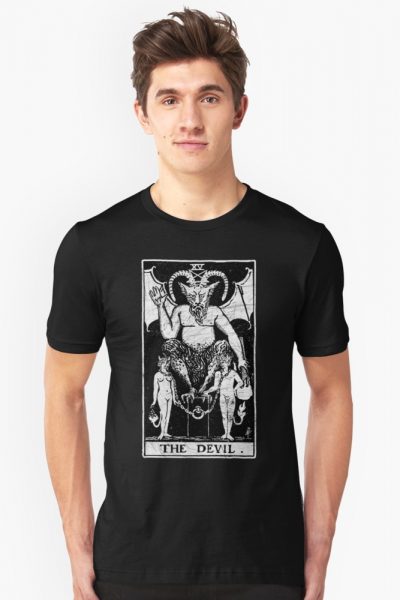 TAROT BIRTH CARD CALCULATOR. / [Video] / The card of the Devil portrays a Satyr, a creature that is half man and half goat. In many myths, the goat was considered an unclean and lustful animal. However, the goat also symbolises the scapegoat, the person or thing upon which people project the inferior side of themselves in order to feel better about themselves. Thus the Devil is the scapegoat we blame for our troubles in life. / The Devil has the wings of a vampire bat, an animal that sucks the life blood out of its prey. This is symbolic of what happens when we give full reign to the realm of our raw desires. We lose our vitality and life energy. The Devil has an almost hypnotic stare, bringing those who come near him within his power. Above him is an inverted pentagram, signifying the darker side of magic and occultism. / At the foot of the Devil stands a man and a woman, both naked and chained to the podium on which the Devil sits. They appear to be held here, against their will, but only closer observation, the chains around their necks are loose and could be easily removed. This symbolises that bondage to the Devil is ultimately a voluntary matter which consciousness can release. The man and woman wear tiny horns like those of the Satyr – they are becoming more and more like the devil the longer they stay here. Both have tails – a further symbol of their animalistic or ‘lower’ tendencies. / The dark and doorless cave implies that the Devil dwells in the most inaccessible realm of the unconscious and only crisis can break through the walls. / The number 15 in numerology equals 6, the number that corresponds to the Lovers, and here the lovers are shown chained, in bondage to the material, sensual side of their nature. This card is ruled by Capricorn, the goat. • Also buy this artwork on apparel, stickers, phone cases, and more.

Satan gave Metal to us!