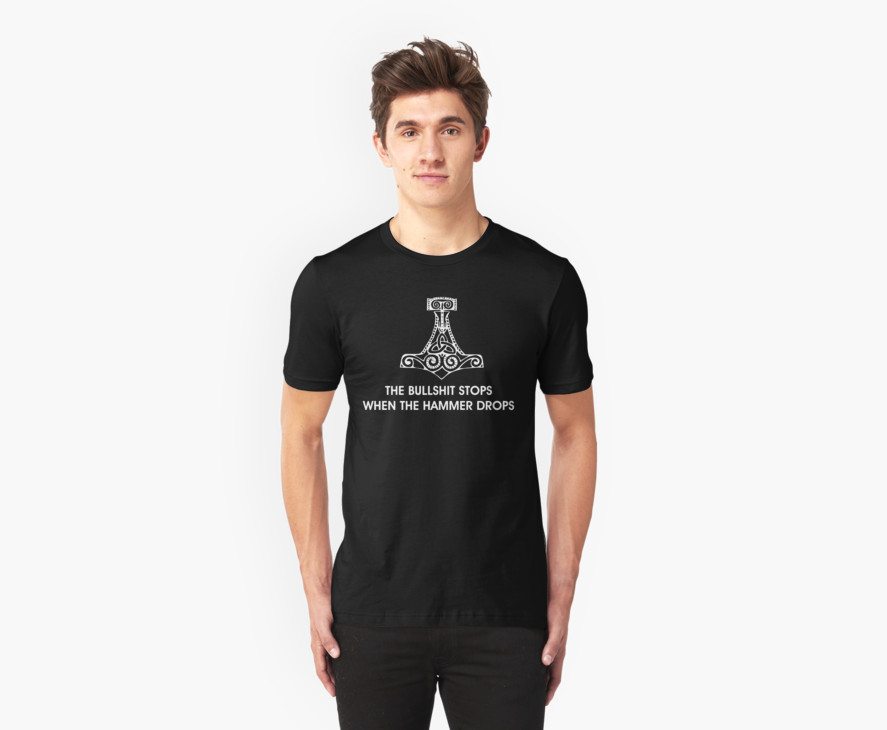 “The famous weapon of Thor was not only the symbol of the destructive power of the storm, and of fire from heaven, but also a protection against the forces of evil and violence. Without it Asgard could no longer be guarded against the giants, and men relied on it also to give security and to support the rule of law.” / - Historian Hilda Roderick Ellis Davidson / “Þá gaf hann Þór hamarinn ok sagði, at hann myndi mega ljósta svá stórt sem hann vildi, hvat sem fyrir væri, at eigi myndi hamarrinn bila, ok ef hann yrpi honum til, þá myndi hann aldri missa ok aldri fljúga svá langt, at eigi myndi hann sækja heim hönd, ok ef þat vildi, þá var hann svá lítill, at hafa mátti serk sér. En þat var lýi á, ar forskeftit var heldr skammt.” / Translation by AG Brodeur: / “Then he gave the hammer to Thor, and said that Thor might smite as hard as he desired, whatsoever might be before him, and the hammer would not fail; and if he threw it at anything, it would never miss, and never fly so far as not to return to his hand; and if be desired, he might keep it in his sark, it was so small; but indeed it was a flaw in the hammer that the fore-haft was somewhat short.” • Also buy this artwork on apparel, stickers, phone cases, and more.

Buy it from
RedBubble
using our coupon:
#avengers#marvel#funny#comics#hammer#mighty thor
702

I May Be Nerdy but Only Periodically Funny Nerd Geek

Vader I find your lack T-Shirt

from The Ecliptomaniac Eclipse Show Commemorative Tee added by