Its About to Get Messi Mens Vneck Short Sleeve T-Shirt 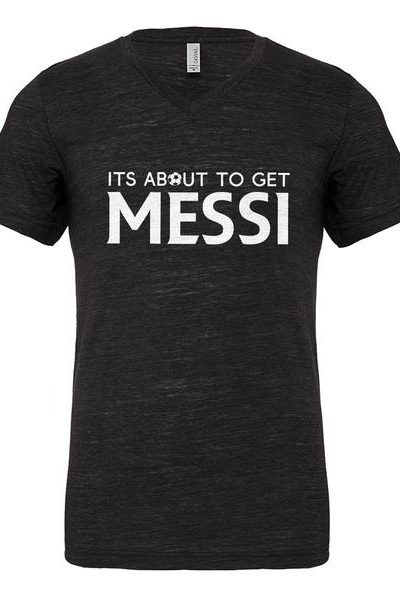 Often considered the best player in the world and rated by many in the sport as the greatest of all time, Lionel Messi is the only football player in history to win five FIFA Ballons d'Or, four of which he won consecutively, and the first player to win three European Golden Shoes. With Barcelona he has won eight La Liga titles and four UEFA Champions League titles, as well as four Copas del Rey. Both a prolific goalscorer and a creative playmaker, Messi holds the records for most goals scored in La Liga, a La Liga season, a football season, and a calendar year, as well as those for most assists made in La Liga and the Copa América. He has scored over 500 senior career goals for club and country. Shop more Soccer Football Futball Sports Team shirts like this. You can get this design on tshirts, tank tops, hoodies and more in a generous range of sizes and colors.Our shirts are carefully selected for quality and comfort so our customers can look great, feel great, and save money. Based in the USA and growing quickly we’re shipping fast and taking names, the same great products and service now available worldwide.
Buy it from
Its About to Get Messi Mens Vneck Short Sleeve T-shirt
#team captain#lionel messi#martian blueberries#gift for him#mens fitted shirt#barcelona club ball#football champion#about to get messi#best soccer player#futball costume#spanish sports team#unisex adult v neck#vneck collar tshirt
349

I Have Oils for That Womens Sleeveless Tank Top

Back to the Friendzone Mens Sleeveless Tank Top

from Back to the Friendzone Mens Sleeveless Tank Top added by

from Back to Bed Womens Sleeveless Tank Top added by