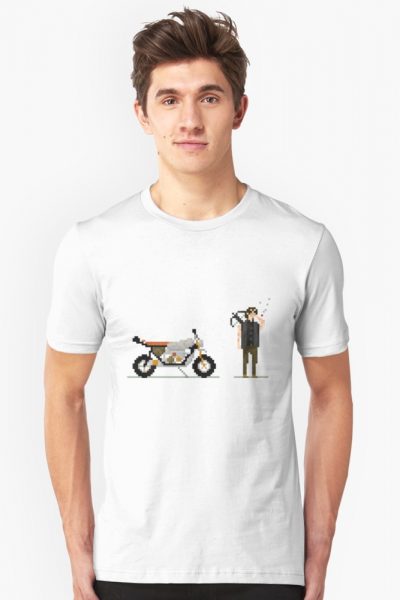 After having a little fun with Merle I decided that Daryl needed some pixel love. / I was happy with Daryl but something was missing so I decided to add his trusty steel horse. / Random Fact: / The story of how Norman Reedus got into acting his pretty awesome. In the man’s own words here it is: “I followed a girl to Los Angeles and was immediately dumped. I got a job at a motorcycle shop in Venice called “Dr. Carl’s Hog Hospital”. The day I quit that job a friend took me to a party up in the hills, a movie people party. I drank way too much and started screaming at the party from the second story of the living room with these giant sunglasses on, someone asked if I wanted to be in a play and took me for pizza to talk about. The first night of the play a wonderful angel of a woman, who was an agent, saw me and side-pocketed me. Hip pocketed me. Whatever you call that and then I booked some stuff and kept running ever since.” Pretty awesome, right? / Wiki Bio (correct at 01/06/2017): / Daryl Dixon is a fictional character from AMC’s horror drama series, The Walking Dead. The character was created for the television series by writers Frank Darabont, Charles H. Eglee and Jack LoGiudice specifically for Norman Reedus; he had read the script for the show and wanted to be a part of it so badly, he begged to audition even for a day role. He was asked to come in and read lines. They picked Merle’s lines, which is why the rumor still abounds that he read for the role of Merle, but Rooker already had the part.1 / 2 / 3 / They liked his audition and gave him the role of Daryl.4 / The character was introduced in the first season as a southerner, expert tracker, living in the shadow of his older brother, Merle. Despite his ill temper and volatility, he is tolerated by the core group of survivors due to his skills in hunting animals and fearless efficiency in killing walkers. This is particularly important in the early days of the apocalypse, when people with survival skills and the moxie to confront the undead are in short supply. / After Merle’s disappearance, Daryl begins to shed his aloof personality and starts to bond with the group, particularly Carol Peletier after her daughter’sdisappearance, and Beth Greene after the two are split off together in season 4. The character eventually becomes the cooperative right-hand man and protector of protagonist Rick Grimes and leads several supply runs. He is one of the longest-surviving characters of the television series, and one of the characters that does not have a counterpart in the comics. His origin is explored in the 2013 video game The Walking Dead: Survival Instinct, and he stars in the mobile game The Walking Dead: No Man’s Land. / Daryl has been well received by fans and critics. Initially a member of the recurring cast, Reedus was upgraded to series regular after season one. • Also buy this artwork on apparel, stickers, phone cases, and more.

Buy it from
RedBubble
using our coupon:
#daryl dixon#walking dead#zombies#amc
359

This is my boomstick!