I love the Civilization franchise and have been playing them since the original. I know, you hear this all the time and every review you read starts the same. But in all honesty, I actually played all the Civ games and spent close to 2000 hours on them. Every time I said I have work to do and I’ll play a few turns, those few turns turned into hours and I often found myself at 4AM waiting for one last turn to finish some research or building so I can save and go to sleep. It’s an addictive game and probably that’s the reason it has so many hardcore fans.

The new game in Sid Meier’s franchise, Civilization VI, has all the promises of being great but right now it’s seriously held back by the AI. I wouldn’t recommend buying this game at full price until the game’s AI get a major update.

I played my first game on Settler difficulty (yeah, Settler stands for Easy) just so I can get used to the new system and tech trees, expecting it to be a bit challenging. As usual I focused more on Science and after awhile I found myself 20 something technologies ahead of my nearest rival (he had 11). So I decided to focus a little on war and started conquering other Civs that were on my continent. After conquering the last Civ on my continent I get a message that I won the through a Cultural Victory. I have no idea why I won, I hardly went after any culture the whole game. It’s the same on a higher difficulty, the game’s AI just doesn’t know how to take advantage of all the boosts to technology and civics that are available. I hate the Civ’s idea of making the game harder by lowering the prices for AI, instead of making it smarter. 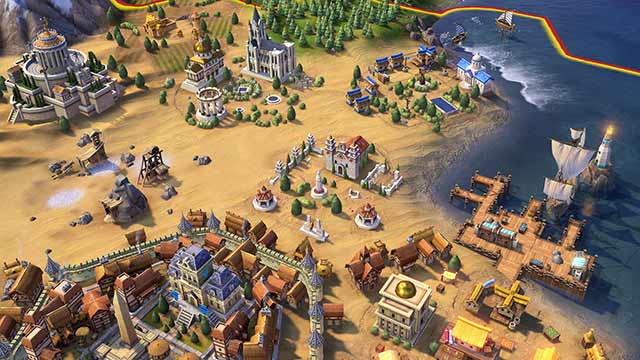 Aside from that Civilization VI looks, sounds and feel awesome. The visuals are gorgeous, there’s so much attention to details, it’s insane. And the soundtrack is incredible, it catches your attention right from the Main Menu.

Friendly advice, wait for the first DLC release before buying Civilization VI, give Firaxis a little more time to fix the bugs and AI. Until then check out these 12 Sid Meier’s Civilization t-shirts I found, more will be added soon.