SnarkFish T-Shirts is a brand listed on TeeHunter. They create the cool, geeky, spiffy type of t-shirts on the web. Currently a small business, working with us to show the world what they’re doing. What better way than to start with an interview, see their story and inspire yourself. If you haven’t yet pulled the trigger to move from a t-shirt designer to building your very own store, these series are what you need.

Who is Chris?
I was born in Boston, grew up in Providence Rhode Island, live in D.C. for 15 years and now live in Berkeley, California. I’m 38. 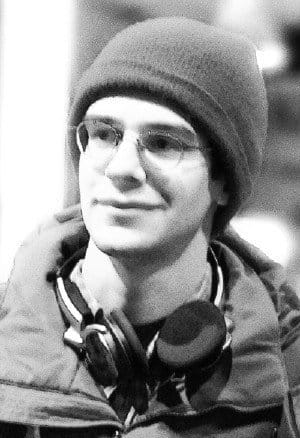 This is the best picture with Chris, the legend says he’s full color but we don’t know for sure.

How did you first get into the t-shirt business?
I had a black and white Thug Life Unicorn shirt that my friend Ashley had made for me that I loved and in April of 2014, I was walking through the dealers area of an anime convention that my stand up comedy troupe, the Geek Comedy Tour, was playing. A t-shirt dealer flagged me down, asked me where I’d gotten the shirt and I told him I’d helped make it. He gave me his card and I thought there might be something there if I struck out on my own.

What ticked you to start a t-shirt business, what was the first impulse?
I think the fact that I wanted an outlet for my geekier impulses. There’s part of me that lives and breathes geek and pop culture and I wanted to see if I could combine this and make it into something cool/eventually self-sustaining.

I can’t draw a straight line with a ruler and a prayer, but I know some insanely talented people and I commission their work.

Do you design the t-shirts yourself, if yes, please tell us how you got into design?
I come up with the concepts and send them along to the designers, then offer feedback and changes and listen to what they have to say. My design skills are minimal, I can’t draw a straight line with a ruler and a prayer, but I know some insanely talented people and I commission their work.

Educated or self-taught?
What little I do know is self-taught. And, trust me, I’m fumbling around in the dark where design is concerned.

Describe the early days when starting Snarkfish t-shirts?
I just launched back in December of 2015, so these are early days and my t-shirt inventory occupies about half a dozen crimson red Ikea cubby units in my kitchen. I’m pretty much playing it by ear at this point, I have a Shopify account set up, I keep my inventory updated as closely as I can and right now all I want to do is get two awesome new designs out every three months and work to grow from there.

Any early days stories you want to share with us?
I’m getting started out of an apartment in Berkeley, my t-shirts occupy about half my kitchen and I’m doing the best I can to keep them organized. We sometimes use the giant inflatable dinosaur costume for marketing materials, which makes it hard to explain to my landlord why once of us is dressed as a giant inflatable T-Rex on his deck and pretending to eat someone for a new t-shirt shot. He has yet to raise the rent, but I think he wonders about the tenant with the t-shirts and the dinosaur costume. 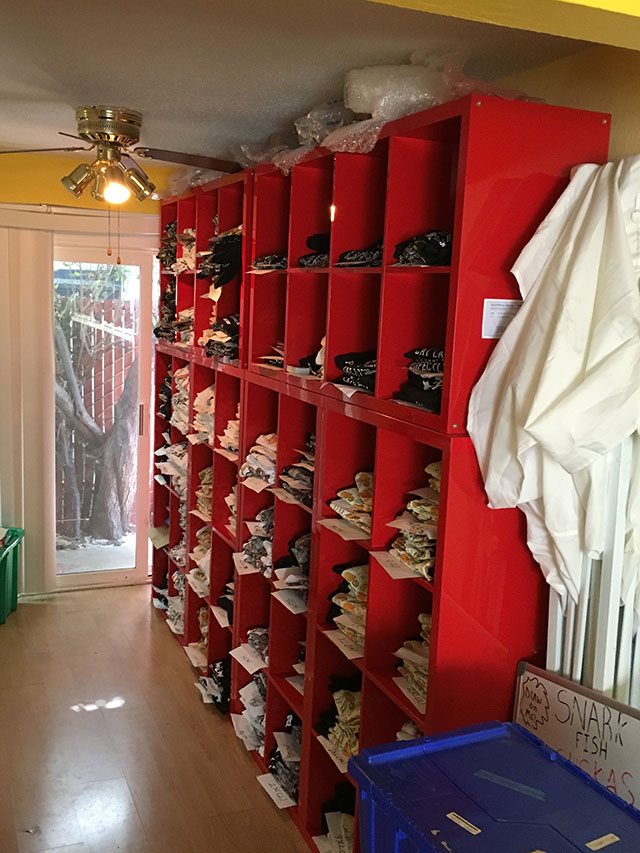 Do you remember the first time you sold a t-shirt?
The first online order I got where the customer was a complete stranger felt amazing. I was working on a client’s laptop recovering data, going about my day and an email came in from someone I didn’t know ordering one of my shirts. That’s pretty much the ultimate feeling in that you don’t know this person, you’ve never met them, but they like your stuff enough to buy it and you’re floating the rest of the day.

If you have a photo/media with it, that would be great, it puts things into retrospective.

How much was it?
It was a single “Darth Vader vs. Batman” shirt for $20.00 plus shipping and handling.

Who bought it or where it got sold?
The buyer was an Abbi Vakil from California.

Tell us a bit about your process when you’re launching a new t-shirt?
Basically, I work with two designer friends back in Brooklyn (Cone Corbett and Sariel Lehyani) and we just talk/nerd out/brainstorm as to what’s cool or funny or what we’re missing and what might work. We come up with a few candidate ideas, decide on two that we’ll work with and a few that we might consider for further down the line and spend the next few weeks sending drafts back and forth, commenting, giving feedback and trying to be as honest as we can as to “Ok, I really like that, but here’s what needs to change”. Honestly, we just pound away on the damn thing until there’s nothing left but something we’re satisfied with and even in cases where we thought we had a design completely locked, we’ll have nights where one of us rolls out of bed at 2 AM, suggests a change and we make it later on that day before we send it to the printer. I use an outfit called Stand Out Stuff in Charlotte, North Carolina for the printing, which is a father/son outfit consisting of Tom Haines and his son, Adam. Tom is a Vietnam veteran, amazingly fun and funny to talk to on the phone and we make sure the art files are there, that he can work with them and he suggests any changes that might need to be made. They send along proofs as they go prior to shipping them out and a week later, I’ll have at least one 30+ UPS box sitting on my doorstep.

Favorite piece of t-shirt you ever sold?
I’m really loving the new black “Cats vs. AT-AT Walker” shirt we’re selling in that the colors fly off the shirt, how we went through literally dozens of drafts and new ideas on the shirt and how well it came together. It’s selling well at venues and it’s pretty much my baby.

Favorite design style?
I don’t really have one, but my favorites tend to be the ones that are honest, geeky and easily express a joke you might have a hard time explaining to someone you’d meet on the street. If it gets a laugh or a smile, you’ve hit a nerve and people like that and that’s the best part of the business.

Hardest decision you had to make?
There hasn’t been a single hardest decision yet and I’m plowing through as best as I can, but the hardest thing that comes up is telling someone “no” on a design idea. They have their heart set on something, they think it’d be really helpful and you like the idea, but you also realize the design idea isn’t done well or is only funny to about six people on the planet and you know three of them, so their idea has additional merit. This is the part that breaks my heart, but I only have so many resources and there’s just part of you that sees that design sitting on the shelves and not moving ever…
Not printing a certain design because it was too expensive, for instance.

Equipment you currently work on?
From my end, I use a 2013 Mac Pro (yep, the black waste basket), an old Samsung LCD with decent color separation and an upgraded 2014 MacBook Pro that I boosted the RAM, installed a solid state drive for the main drive on and replaced the optical drive with a carrier and a one terabyte conventional hard drive with to use for extra space. In short, whatever I need to do with graphics, I can do with this. Cone Corbett, my chief designer, uses a MacBook Pro, Adobe Creative Suite 5 and a Wacom graphics tablet  that she pulls off miracles with.

Tell us a t-shirt business you’re looking up to, we all have a milestone?
The guys at Penny Arcade are pretty much my heroes in what they can do with t-shirts and design and they’ve built their following from nothing over the years. I don’t really have a favorite design of their, but I just admire how hard they work, how they always come out with amazing stuff and how well it comes together. I’m a guy working out of his kitchen at this point and somewhere down the line I’d like to have an honest to god studio complete with laptops, graphics tablets and enough caffeinated drinks to kill a moose so that designers could come in, joke around and crank out some amazing stuff, but it’s one small step at a time until that point. Until then, the best I can do is hire amazing people to help out, get over my own hesitancies, get in front of audiences that like what I’m doing at various events and grow from there.

We’re going to continue the series of interviews with founders. Meanwhile check out SnarkFish’s brand on TeeHunter and remember, we’re showcasing the best t-shirts (and brands) on the web!