Coders, developers, web designers, or anybody that has touched an online business will resonate with our guest, Ramiro Gomez, who is designing t-shirts for them. We found Ramiro on RedBubble and one of his t-shirts, “May the source be with you“, is extremely popular at TeeHunter. We sold quite a few for RedBubble.

May The Source Be With You – Stars Wars Parody for Programmers

Hi everyone! I’m a programmer and writer from Berlin. I run several websites with topics ranging from computer hardware, programming to rock music. I’m not a designer by trade, but I do often create graphics in the form of interactive or static data visualizations.

Occasionally, these graphics end up as designs I offer through Redbubble and Zazzle for printing on t-shirts, stickers and posters. I also create t-shirt designs that mainly consist of text relating to programming and programmer humor. You can find our more about me and my work on my website ramiro.org. 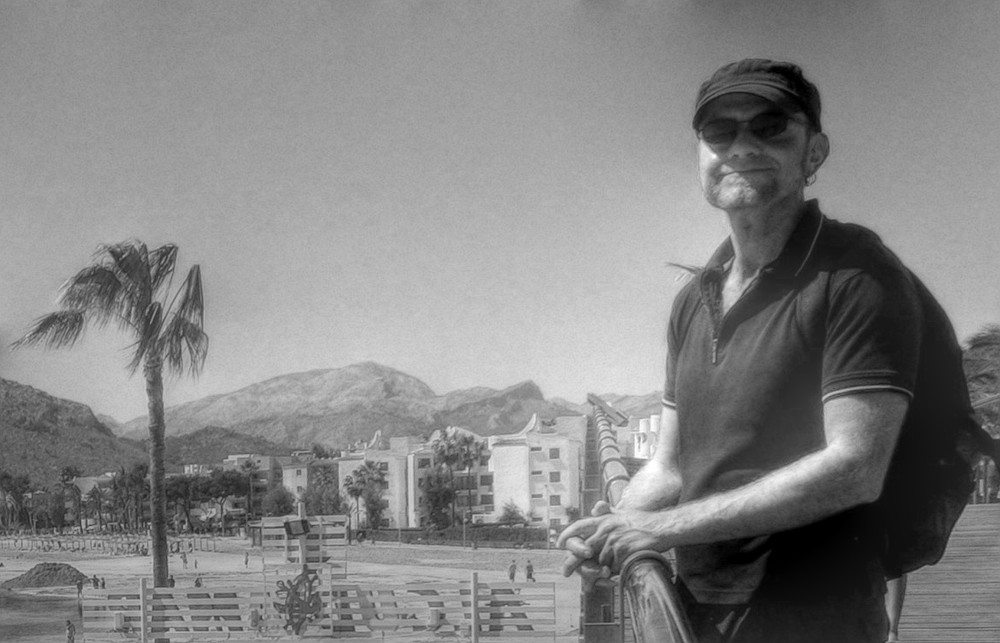 How did you first get into design?

I created my first web pages in the late 1990s and started to learn about design principles, because I didn’t want badly designed pages to turn away people. I didn’t dive too deep into web design though, but focused on the programming part.

Later, through my work as a programmer I got into data visualization, where visual aspects of human perception are very important. So despite being more of a technical guy, design has played a role in what I do for many years.

Could you name a couple of online magazines that you browse regularly?

I mostly go to reddit to find new things. I have a few public multireddits, where you can see my favorite subreddits. Here is one for data and visualization and one for maps.

I also follow some blogs and people, for example Mike Bostock, creator of the popular D3.js library and Nadieh Bremer’s Visual Cinnamon blog.

What would you say is the amount of time you spend coding vs. designing on avg. in any given day?

It’s difficult for me to cleanly separate the two. I definitely spend a lot more time working in a code editor than in graphics programs like Inkscape or GIMP. But then a lot of the code I write is for presentation purposes. So I think the time is pretty balanced between coding and designing.

Do you do any marketing for the t-shirts besides listing on RedBubble?

I sometimes write about how I create graphics. For example this article shows how to create a map from pub locations that I offer for sale on posters. 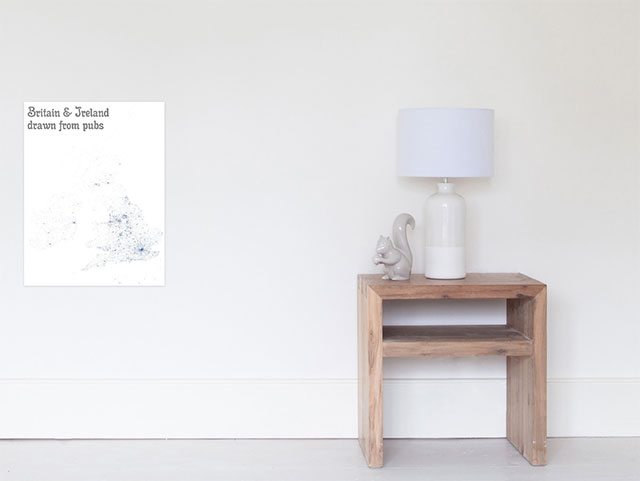 I share articles like that on reddit and tweet about them. I’m rather reluctant about sharing product links directly. I think this only makes sense, when you have the right audience. That said, I’m happy that TeeHunter has featured some of my shirts and about the opportunity to do this interview with you!

Do you remember the first time you sold a piece of your art?

It wasn’t the first product I sold online via a print on demand service, but speaking of art, it was a poster created from this interactive graph visualization of programming languages https://exploringdata.github.io/vis/programming-languages-influence-network/. 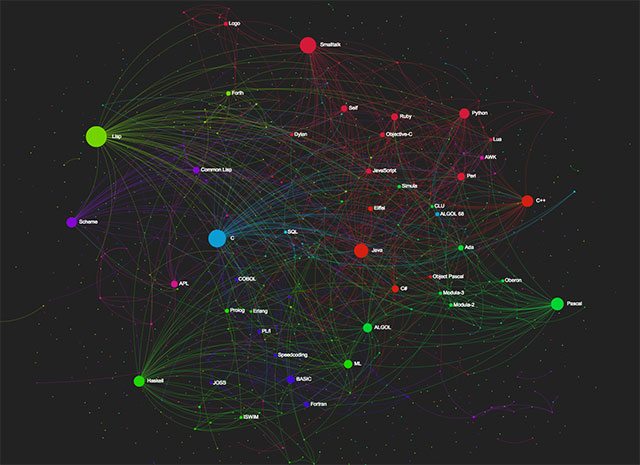 Someone bought a poster of it on Zazzle and it was exciting, although I “only” earned around $5 from it. I realized that I could combine programming and design to create products, that people actually liked enough to pay for them.

Tell us a bit about your process when you’re designing a new t-shirt?

Usually, ideas for new designs come spontaneous, when I see something interesting or read something funny. I don’t sit down and think “now I’ll create a t-shirt design”, but it is more like “hey this is funny, I can make a design from it”.

For example, I’ve seen unicode emoticons being used more and more on the web. Combining one of them, the shrug emoticon, with a typical programmer excuse as on this shirt seemed like a fun idea and it turned into a simple shirt design that people really like.

Shrug it works on my machine – Programmer Excuse Design

When I have such an idea, I open up Inkscape and think about how I can place and size the text pieces, try different colors, fonts and font effects until I get to a result that looks good to me. Then I upload and preview the design on the actual products. Often enough, I then go back to the graphics editing program and change aspects like size or color and retry. This may repeat several times.

Typically, I want t-shirts designs to cover most part of the printable area and texts to be well readable and aligned. I use color sparingly and limit color use to colors that contrast well. I even built a little online tool to make this easier for Redbubble and Zazzle http://geeksta.net/tools/shirt-color-helper/. These guiding principles help me make design decisions and get to a result.

Favorite place to sell your work?

Redbubble, because they have the most intuitive and usable upload process and a wide variety of products.

Favorite piece of design you made?

I like the programming languages influence graph the most http://www.redbubble.com/people/ramiro/works/12685897 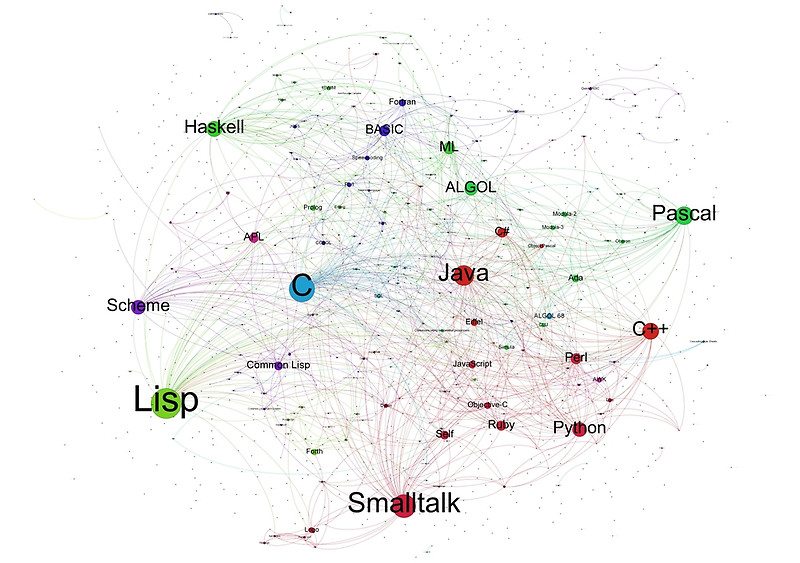 As a creator, I enjoy creating data art the most. As a consumer, I like the art you find in the punk and rock’n’roll subcultures.

Where can a new designer start learning online?

I think you can find the best advice and learn the most from designers themselves, especially from those whose designs you like. For technical skills, there are several great channels on YouTube. For example, I learned a lot about using Inkscape from Nick Saporito’s and the PhotoAdvanced2 channels.

Equipment you currently work on?

For manual sketches, I simply use pencil and paper. But I mostly start right from the beginning on my computer using Inkscape for drawing and textual designs, GIMP for image editing and Gephi for network graphs. When I write code to create graphics, I do so in JavaScript and Python using libraries, such as D3.js, sigma.js and matplotlib. The tools I mentioned are free to use and really great pieces of software that can get you a long way.

Tag a designer you’d like to be interviewed next and tell us why?

Martin Vargic creates tremendous maps. I admire the amount of detail he puts into his work and would love to learn more about his creative process.

Let’s end up with a piece of advice for fellow t-shirt designers because I know they are going to watch this interview:

A practical tip, which helped my increase shirt sales: if your design doesn’t cover the whole printable area on a shirt, center it around the top part so it is printed on the chest rather than the stomach.

May The Source Be With You – Stars Wars Parody for Programmers

I PLAY UKULELE WHAT IS YOUR SUPERPOWER? Red/Yellow on Blue Parody Design

Shrug it works on my machine – Programmer Excuse Design