Every story has two sides. For the talented artist known only as Dada, the best way to tell a story is to mash those two sides together. Her collection of artwork puts on display the portraits of iconic characters and their counterparts, with both of them cut down the middle and juxtaposed against one another.

At first glance, Dada’s artwork may appear to be very surface level, yet there is a much deeper theme to be recognized within her mashup pieces. Each one draws into focus both the similarities and the differences between the two characters in the frame. It forces us to look at these characters not just as individuals, but to compare them to one another, both in the sense of physical appearance and personality traits.

One of Dada’s most eye-catching pieces is that of the Disney princess Belle alongside her counterpart, the Beast. One of the most prevalent themes of the movie Beauty and the Beast was to draw comparisons between these two characters—how they looked, how they behaved, and the hardships they dealt with—and the artwork mashing the two of them together is able to accomplish much of this in a single frame. 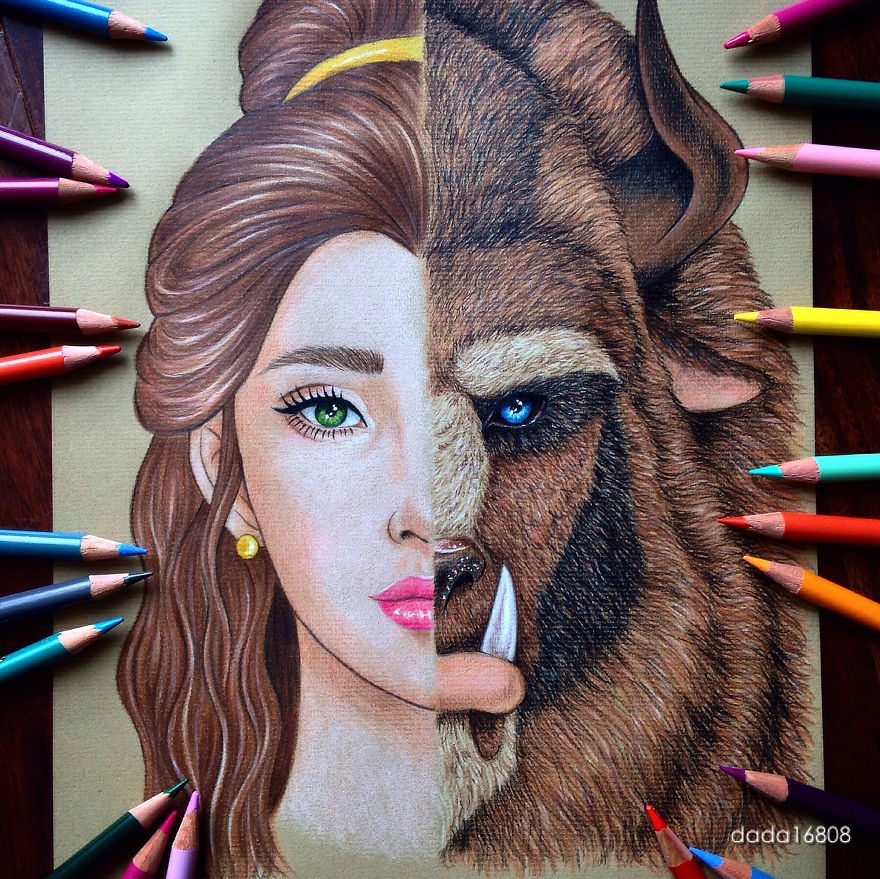 Likewise, Dada’s piece titled “A Story of Two Sisters” shows the faces of Elsa and Anna combined together in a single portrait. The ease at which their features flow together into one figure shows the highlights the shared genetics between the two of them, yet the contrasting differences in the color of their hair shows the difference between the two personalities of these sisters as well. Much like with her art combining Belle and the Beast, “A Story of Two Sisters” perfectly compares and contrasts these two characters, showcasing both their similarities and their differences. 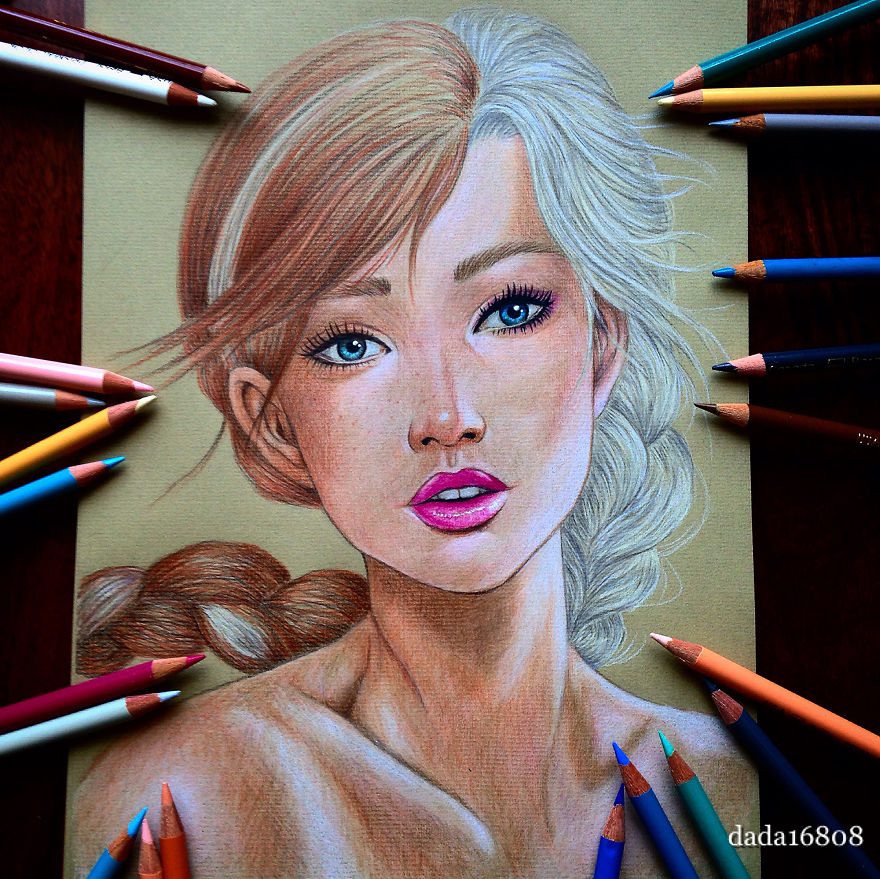 This is a recurring theme throughout Dada’s entire collection. Each piece, from the one combining Jasmine and Rajah to the on combining Ariel and Vanessa, is meant to highlight two characters not as individuals, but as an inseparable duo. Some of the portraits flow together perfectly, combining to form a figure that is almost faultlessly symmetrical. For others, the characters are simply too different. Whichever the case, the collection is a powerful testament to what can be learned by comparing and contrasting the most telling physical traits of anyone—their face.

It’s fair to summarize Dada’s work as a tale of two faces, and much like the novel from which we’ve drawn this reference, it’s a collection with quite the story to tell.

We’re all about t-shirts, she’s mostly about awesome paintings but we both love design, so here’s a cheers to that, have a look: 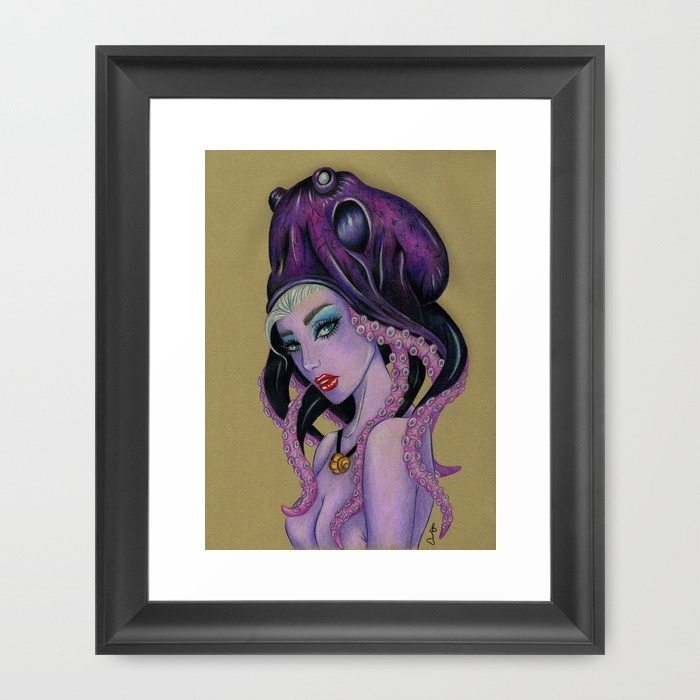 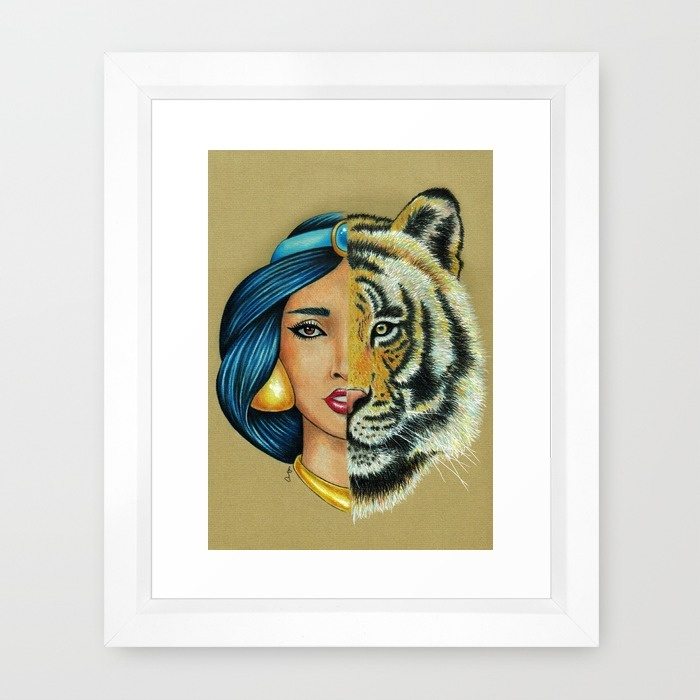 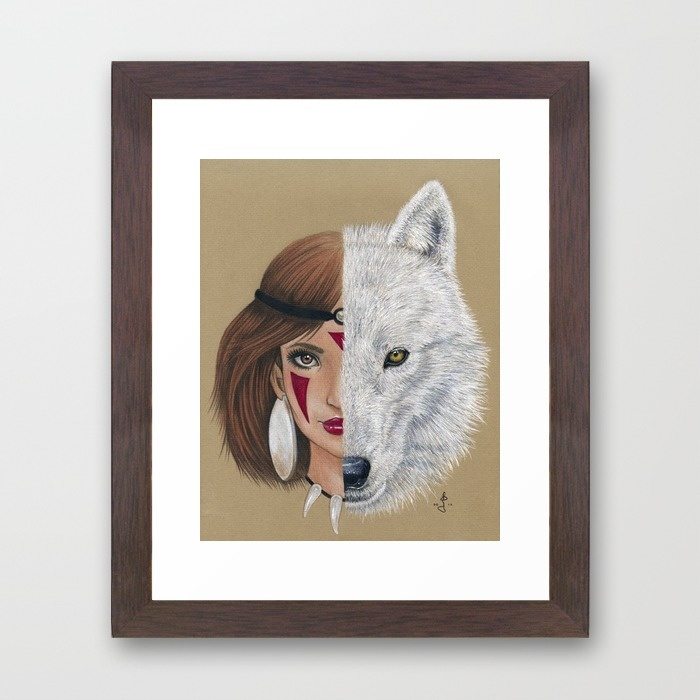