This Friday we have an artist from Toronto, whose t-shirts we first found during our Batman vs Superman – Dawn of Justice article.

Tell us a little about yourself

I was born Andrew Sebastian Kwan and I hail from Toronto, Canada. I’m 22 years old!

When and how did you first start getting into design?

I always drew when I was a kid and I never stopped. From an early age I figured out that I wanted to do go in a creative direction as a career. I grew up loving the Batman animated series and was always fascinated with how visually different it looked from the comics. It wasn’t until around 10th grade when I was taking all the art classes my high school offered that I discovered all these different ways of creating things- painting and fine art to digital graphic design and commercial art.

What does it take to be a good designer? Do you recommend going to school to learn art and graphic design?

In short, all you need is a good eye. But I say that knowing it takes a lot of time and learning to develop a good eye. Everyone is different so not everyone needs to go to school. I know many amazing artists that have never had any formal training. I went to school (for sequential illustration)- going in, I felt like I didn’t really need to be there and I could learn on my own. In hindsight, I gathered valuable knowledge that would have taken me a lot longer to figure out on my own. It’s all about discipline and being able to see what you need to improve upon with your work. I think most artists who have attended a school would say that the lessons taught can be found outside the walls of a classroom or studio or wherever… the difference is how those lessons are communicated and delivered to you. So I think it’s up to the artist to decide whether or not they need formal training.

I can say personally, that I was able to reach a point in my abilities faster than if I was flying solo. There’s the advantage of being given assignments that I wouldn’t always be interested in or forced to use a style or medium I wasn’t comfortable in. Some people might think these are reasons to not go. But in doing so, I would discover ways of making things interesting for myself (and stretching my creativity and problem solving), sometimes I found that I was quite good at things that I thought I sucked at (turns out I’m a decent painter!) and basically it gave me all the tools needed to take on a variety of different jobs that may come my way and be able to create all the different things I saw in my head.

How long did it take to start getting noticed and actually selling your artwork?

I think I’m still in the process of getting noticed, but that’s all part of the journey. I started selling my art when I started attending artist alley at different comic book conventions back in 2012 and continue to do so presently. It was probably around the summer of 2014 that things started picking up for me. It was just after graduating college and I had the time to apply what I learned to pretty much anything I wanted to do, and some cool things grew from that freedom.

If you were to pick a favorite design you have created, which one would it be and why?

That’s always a tough decision! I like a great many of my pieces, otherwise I wouldn’t have wanted to create them. But if I had to choose, it’s probably Batman: Fury Road. Batman’s my favorite comic book character and for a while I’ve been trying to come up with a unique take on the character. He’s so popular and he’s been interpreted so many different ways and I had just seen Mad Max: Fury Road and loved it (who doesn’t?). I thought “what would the Batmobile look like in a world like this?” and this image struck me and I had to get it out! A lot of hard work went in to redesigning characters and also designing the vehicles before putting final pen to paper which also took some time. In the end I was pretty satisfied with the effort put in and a lot of people also shared my feelings about it which was pretty cool!

Tell us about your creative process, from the beginning of a typical piece to its completion. 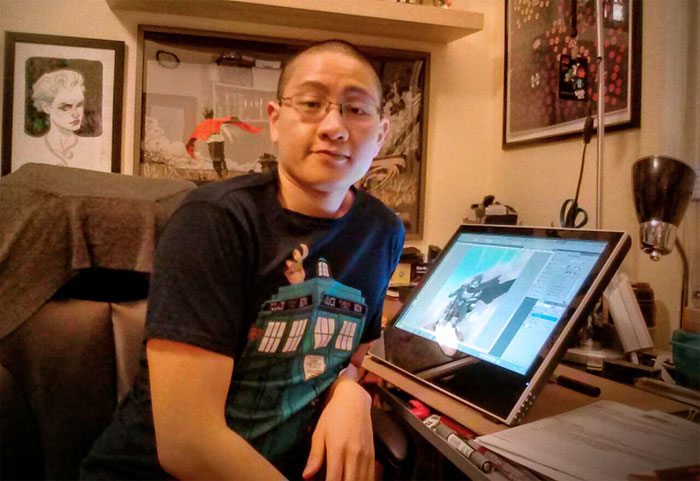 When I create a piece, I usually start with rough sketch layouts which are done either digitally on my laptop and tablet or in a notebook (depending on which one I can get to faster). I usually do a few different compositions and when I choose one to go with, I do what I call rough pencils. I use Manga studio to draw.
At this point, I’m ready to ink/ clean up lines. I look at the piece and decide what kind of vibe I’m trying to go for (clean or gritty). I have two different styles which are informed by what type of media I use; digital or traditional. When I illustrate digitally, I get a very clean and slick look and traditionally, I like to feel the tooth and grain of the paper and get into all the nitty gritty details. So I do one or the other and once that’s finished I move on to the colouring stage which is usually the longest for me.

I don’t have a standard process for colouring, but my clean line art is ready, I do a rough colour scheme where I just take a regular brush and start colouring in and experimenting with different colours. Sometimes I use Manga Studio, sometimes I use Photoshop. Once I have this rough colour scheme that I’m happy with, I start to do the final pass. I use the eye dropper tool to select colours from my rough and do a neater version. Sometimes I might use several layers and filters and sometimes I might just use one layer and ‘paint’ everything together. It’s different with every piece!

Tell us something interesting in your life (such as achievements, funny story, places travelled, etc.)

This might be interesting- I’ve always been interested in filmmaking. I studied illustration and storytelling in college and film is another form of visual storytelling, so I’ve always been interested. I took filmmaking courses in high school with many friends that went into that industry while I took the art route. But I still play with some of the programs and tech as a hobby.
Anyways, I’m also a huge Star Wars fan and a couple years ago I decided to recut and edit the Star Wars prequels into a single 2 hour film called “Star Wars I-III: A Phantom Edit” which you can find on youtube. I love watching movie marathons and with a new Star Wars trilogy on the horizon, there’s no way I can make it through 9 films. If I could take the prequels (what I think are lesser achievements, to put it lightly) and combine them into a single story, that would be easier to digest.

This was really intended to be a private project where I could learn about pacing, rhythm and shot selection- stuff that I could apply when creating comics. But, the opportunity of showing it to people came about when my college wanted to hold a movie night but couldn’t figure out what movie to show. I pitched them this movie and they loved it. They even kept the movie a mystery and hyped up the event as the world premiere of a movie long in the making. It was great! And when people showed up and I made a brief speech to finally reveal what we were all about to watch, the look on everyone’s face was priceless!
Sometime went by and for the hell of it, I decided to upload it to YouTube thinking only a few friends would check it out or use it as a gag on other people. But it kind of exploded with all the new Star Wars announcements, it was a perfect storm of attention- I’ll just say, I will never underestimate the Star Wars community and I thought that was pretty cool!

Do you have any good advice for emerging artists?

Keep an open mind, learn lots, do what you love and stay mellow- in that order. These are more mindsets that I think influence artistic growth. As creators, we have to stay open to interpretation and things constantly changing and being different. We have to accept that and when we do, we become much more open to the whole world around us. This applies to art, I know a lot of young artists tend to get a head of themselves in terms of wanting to draw cool stuff, but the most important thing is to learn your basics. Learn everything there is to know about the principles of art, how to really develop an artistic eye and practice traditional art techniques. These thing may sound boring but when you’re open minded, you’re willing to accept that there’s always room for improvement and you can learn valuable things from people and places you would least expect. Sometimes those are the best lessons. Leave your comfort zone with open arms. No matter what, strive to create good art. Learn to create good art out of something you’re not invested in because once you get to that point, imagine what you could do with something you DO care about. Find a way to make everything you do interesting. Then come back and do what you love and see how much better you have become. And through all of this, keep your chin up and stay mellow. There’s a reason movies always portray artists as super laid-back hippies; beauty hardly ever comes out of anger or frustration. Stay mellow, go with the flow and success will follow.