Since Shireen has been burned, and Olly stabbed Jon … then we may see a resurrected Jon Snow (as Azor Ahai)?

My theory is this: Shireen was a king’s-blood sacrifice. We’ve seen this highly powerful ritual of blood magic before, but to what end in this scenario? Only thing I can think of is resurrecting a dead Jon Snow. Death pays for life. So, an angsty Olly (or any one of those alienated Crows) StabbyMcstabbs Jon Snow. Jon Dies. But where does he go? It’s possible Jon wargs last minute into either Wun Wun (since they’ve kept him around- possible plot device?) or Ghost and fights them off, but his human self still dies. Jon spends a while in Ghost getting really primal, almost forgetting his human self. 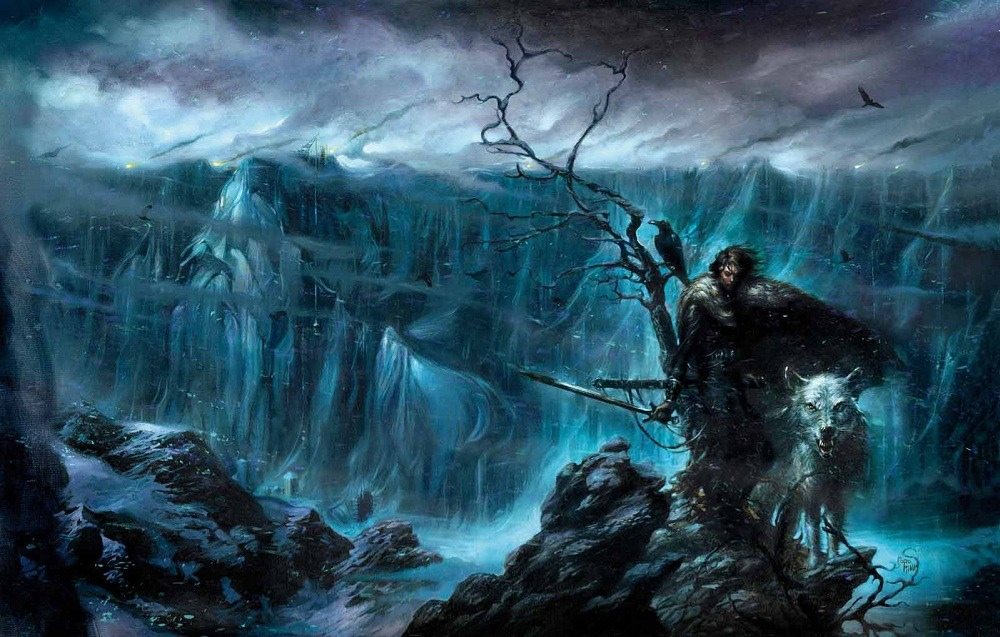 He might go on a crazy limbo astral projection journey where he finds out who he truly is (R+L=J) guided by tree matrix Bran/BR to Winterfell tombs. This could also happen while he is asleep as Ghost, dreaming as dead Jon Snow, or something. Either way:

They store him in a cold ice cell within the wall, to be taken to Winterfell tombs. Melisandre comes back to the wall (rumored she sees Jon Snow again before end of the shows season) with Selyse and Davos. Melisandre says they need to burn Jon’s body on funeral pyre. They try to burn Jon’s body but run out of matches (oh snap! can’t burn Targaryens son!) Resurrection?

Melisandre is freaking out, does resurrection spells using shadow power gained from kings-blood sacrifice of Shireen. Jon comes back as something similar to whatever Beric Dondarrion is. OR The Night’s King attacks and makes a resurrection cameo, Jon’s eyes turn blue like an Other and rises from the pyre. Or he comes back like whatever Coldhands is thanks to Bran/BR. 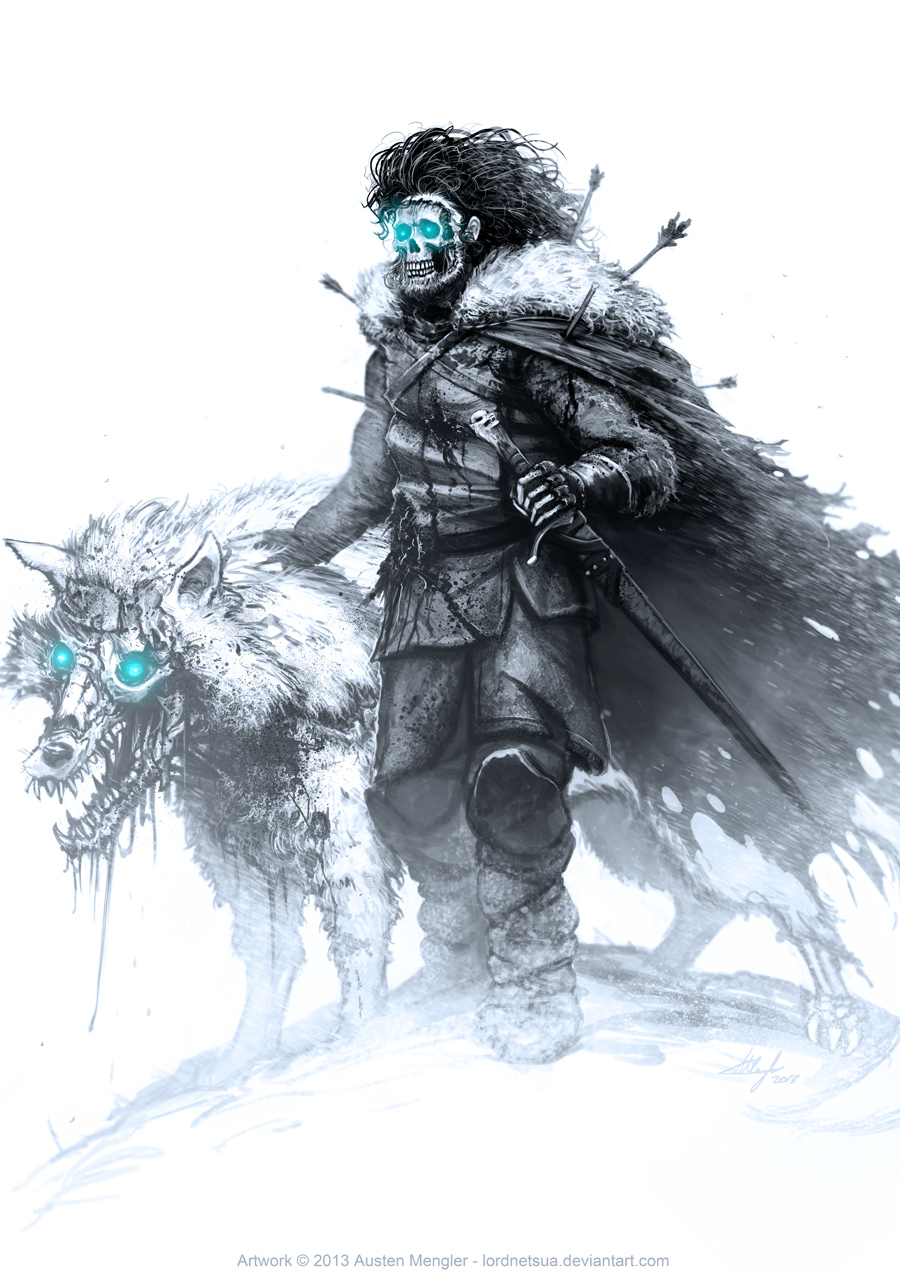 Jon then takes Blackfyre, which is with him on the funeral pyre, walks up to Melisandre and stabs her right through the breast! Jon’s sword then bursts into red (or black) flames! MEGA TINFOIL: Azor Ahai reborn is NOT working for the fire aspect this time. He is working for the Shadow, the duality of flame (light/dark). Who do we have that loves the darkness, and long nights? The Others, of course! Azor Ahai’s job long ago was to save the human race from darkness, the long night. THIS TIME, he is here to save the human race as well as the Others from the flame/light, as the fire dragons could genocide the Others and humans pose a threat to themselves (fire mad Targaryens, for one). Bloodraven is a fan of the shadow, brainwashing tree-matrix Bran into embracing the shadow as well, and since he is orchestrating Jon Snows ascension to Azor Ahai it would make sense if AA served the Shadow as well. The humans are increasingly encroaching on the Others’ land, breaking the ancient pact made by the first men, CotF, and the Others. THIS IS WHY THEY ARE HOSTILE. In the show they have been warning humans before they attack with symbolic arrangements of wights/dead. They let people live beyond the Wall only with sacrifice (ex. Craster’s baby adoption center).

So the Others want to rid the world of fire dragons, and then get everyone in Westeros on the same page about respecting their boundaries/pact. I believe Bloodraven, the Night’s King, his 12 other ex-Lord Commanders, and CotF also want to restore the pact as well. They have reason to help the Others on their quest.

But why Jon Snow?

The Starks (and, of course, the North) remember. What do they, historically, remember? THE PACT! There’s a reason there’s always a Stark in Winterfell. They are the mediators of the Old Gods and Humans. Bloodraven, a bastard Targaryen and ex-Lord Commander just like Jon Snow (if R+L=J), has been orchestrating Jon’s death and resurrection, just as he had orchestrated getting Bran into the tree matrix and a bunch of other happenings beyond the Wall/Westeros. BR sees Jon Snow as the one who will restore the balance to Westeros, being half fire (Targaryen) and half Ice (Stark/first men/Other? descendent).

I subscribe to the theory of IceBrandon which states that Bran will be controlling an ice dragon, which hatched from an egg that Bloodraven has according to lore from the Tales of Dunk and Egg series. The ice dragons existence has been hinted at several times, and Bran “won’t walk again, but he will fly” and ends up flying with “wings unseen” having no feathers but a “different kind of wings“. Translucent wings, never been seen! Besides this, he will be taking over BR’s position watching from the trees. 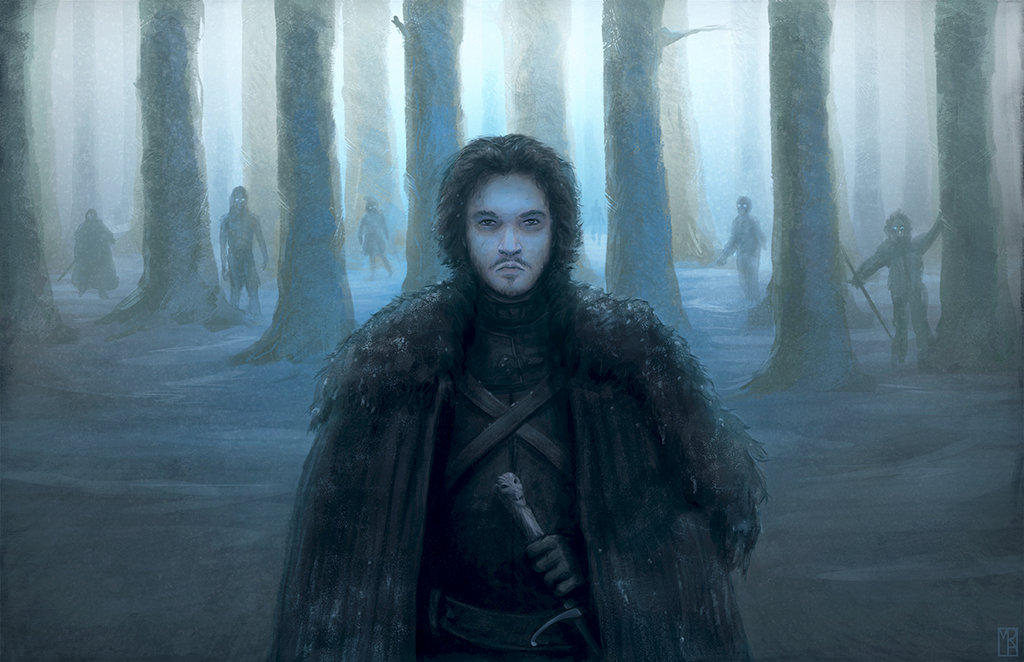 Jon Snow with Shadowbringer (as opposed to Lightbringer) will now go into the night and talk to the Night’s King and Company (who wasn’t taunting him at Hardhome, rather showing him what power could be his ;) ). With Jon gone, things go horrible at the wall with the Night’s Watch committing atrocities against the Wildlings (raping, torturing, etc.). Jon Snow learns of the Others demands, and of the pact, and about the wights (maybe he will learn to resurrect people as wights in his journey?).

Jon Snow returns to the wall, red (or black) flame sword in hand, armor of black ice, possibly on the back of an Ice Dragon controlled by Bran, an army of wights under his control and….the Horn of Winter! He would acquire this in the Land of Always Winter. This would be enough to convince the Night’s Watch to back off and both parties to obey his command. Jon snow evacuates the wall, blows the horn, the Wall crashes to the ground. Jon tells the Night’s Watch and Wildlings of the Others motives, the ancient pact the Night’s Watch had with them/CotF, and the dangers that the fire dragons pose to humans and Others/CotF. Dissenters are dealt with, the Night’s Watch, Undead Shadowknight AA Jon Snow, Wildings, and Wights march toward Winterfell. Jon begins his defense of realm against the conquest of the fire (possibly raising all those dead Starks in Winterfell catacombs to help, killing all the Boltons). Things would get more complicated later, but I’m all out of tinfoil for right now. 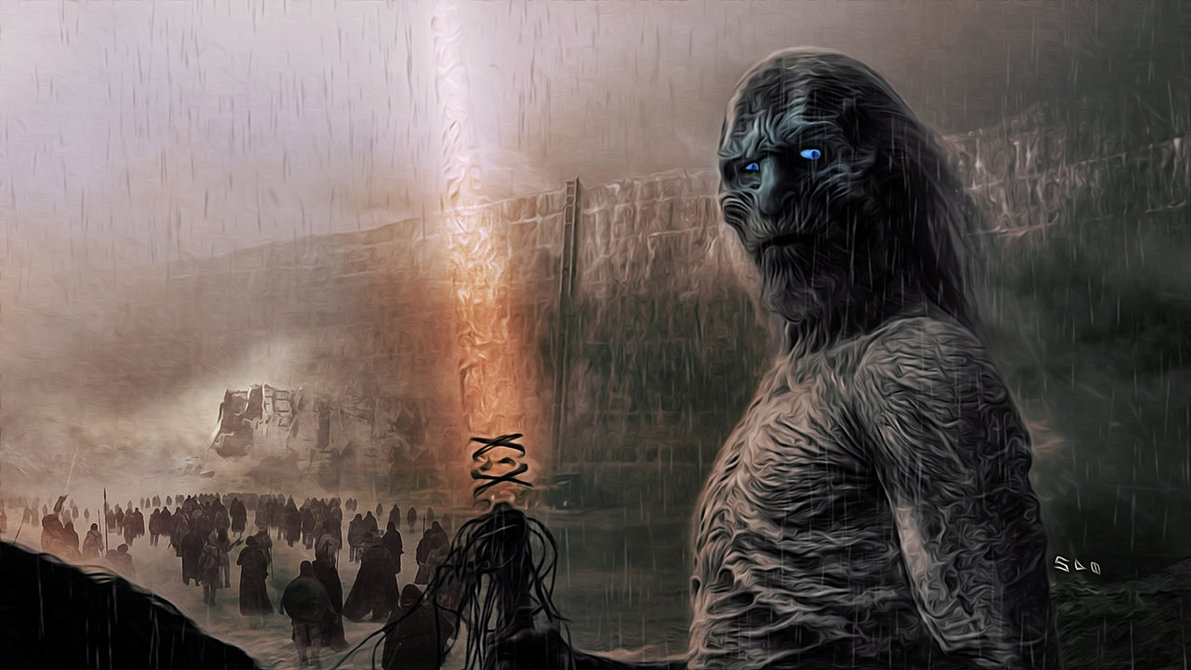 Disclaimer: This theory was first posted on Reddit by user asoiaftheory!