Game of Thrones – Creating the Weapons of Dorne

There’s a lot of things that I think are very amazing about Game of Thrones, and one of them is definitely the weapons they use. Remember Ice? The huge sword that Ned Stark was using? Need I say more?

Well it seems that we’re in for another treat with the Sand Snakes’ weapons. The Sand Snakes are the bastard daughters of Prince Oberyn Martell and Ellaria Sand. Sand is the name bastards are given in Dorne, like Snow is given to bastards in the North. Obara (Keisha Castle-Hughes), Tyene (Rosabell Laurenti Sellers), and Nymeria Sand (Jessica Henwick) have different mothers in the books, but for the show this is just easier and kind of makes more sense. They are all deadly though, and looking for vengeance. Take a look at them and the weapons of Dorne in the featurette below.

Nymeria (named after a famous warrior queen, the same one Arya named her Direwolf after) is using a very cool looking whip. Tyene is using double daggers (even though she prefers to use poison in the books) and they’re looking pretty dashing. Obara though is using a spear like her father used to.

But who are these women anyway? This is a series where nobody is ever safe, and the world is huge, with loads of characters. There is no central hero around whom everything revolves. Sure there are moments when you feel like the story is focusing on one person, but that’s usually only temporary. The next moment that person could die, or simply disappear. But that means that new people come to the center stage, and have their story told. The easy answer here is that if you liked prince Oberyn Martell, you will love his daughters. And if you didn’t, you might still appreciate the story arc. 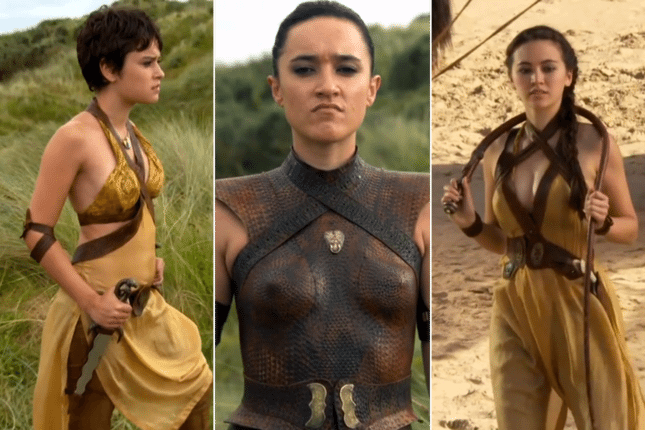 Plus we get to meet Myrcella again, Joffrey’s little sister who by Dornish law should be the next in line to become Queen. Meaning that she would be queen instead of her brother who is currently sitting on the throne, but isn’t too bothered by it. He likes cats more than ruling.

We’re just a month away from Season 5 now and I believe it’s not going to let anybody down.

In the beginning the Universe was created. This has made a lot of people very angry and been widely regarded as a bad move. -Douglas Adams