Even though Breaking Bad ended in 2013 there was still a story that needed to be told. Better Call Saul will follow sleazy lawyer Saul Goodman (James McGill) in the years before he became wrapped up with Walter White and Jesse Pinkman.

Better Call Saul is the tale of how sleazy lawyer Jimmy McGill became criminal lawyer Saul Goodman. With the release of the new extended trailer we get the chance to see a few old  favorites (we find out how he meets Mike) and some new promising characters.

One of the biggest questions Breaking Bad fans have asked is: Will we see Walt and Jesse in Better Call Saul?

“Walt and Jesse will not appear in season one. We really want this to stand on its own,” co-showrunner Peter Gould

“Our intention and our hope is that it will feel proper and organic,” co-showrunner Vince Gilligan said of the former Bad stars returning. “If it feels like a stunt, then we in the writers room will feel like we have done something wrong.” 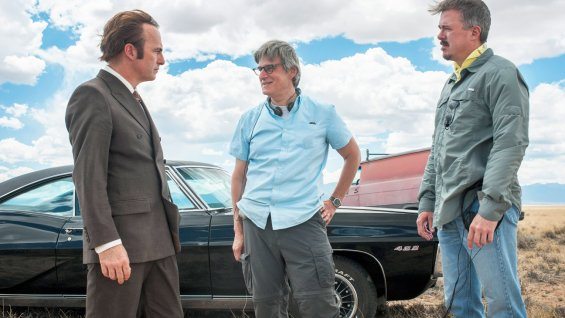 Since Better Call Saul takes place years before the events of Breaking Bad, star Bob Odenkirk points out, “Jesse would be in middle school.” On the other hand the show creators tease that Better Call Saul will play with time, so a flash-forward appearance with Jesse Pinkman or Walter White isn’t out of the question yet. I guess we’ll just have to wait and see.

The drama is getting a two-night series premiere on February 8th and February 9th on AMC and from what I’ve seen this will be the best spinoff ever made.

Until then, just in case you didn’t know Saul has his own website. SO if you’re ever in need of a good sleazy lawyer make sure to check it out – BetterCallSaul.com

A real Breaking Bad fan needs some Better Call Saul t-shirts too, so check these out!