In the highly unlikely scenario that you’ve never heard of Threadless, the company is a community driven clothing brand and online apparel store run by skinnyCorp of Chicago, Illinois, founded in 2000. Co-founders Jake Nickell and Jacob DeHart started the company with $1,000 after entering an Internet tshirt design contest. They then set about reinventing the very concept of an internet tshirt design contest and the rest, as they say, is history. Threadless is now a multi-million dollar brand, loved across the globe. A brand that boasts one of the most active and dynamic communities on the web today.

Members of the Threadless community submit tshirt designs online, which are then put to a public vote via the Threadless website. A small percentage of submitted designs are selected for printing and then sold through an online store, often to the very people who voted the designs into print in the first place. The creators of the winning designs receive a prize of cash and store credit. It is what is known as a totally genius business model and has proved, as the years have passed how popular this still extremely quirky, independent feeling brand can be.

Tee Hunter spoke to Threadless Co-Founder Jake Nickell (pictured below) about the ten year anniversary, his favourite designers, the future of the brand and plans for expansion. 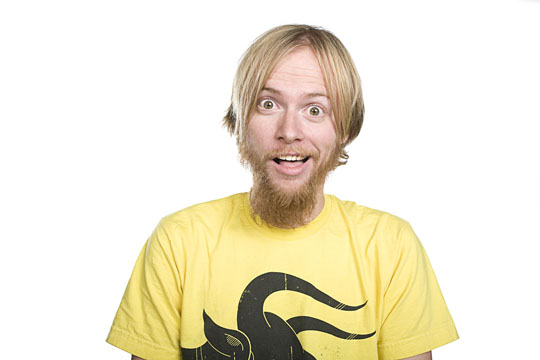 TH: It’s over a decade since you founded Threadless in, as is the case with many internet success stories, suitably humble and low key circumstances – how does it feel to look back from where the brand is right now?
JN: One of the things that I find most satisfying looking back is just the culture shifts I’ve witnessed that allowed Threadless to grow as large as it has. When I was growing up, my only options for clothing, especially t-shirts, were to wear big corporate logos and brand names across my chest. Threadless is all about art on tees. There are no logos, no branding… so I find that really exciting, that you can wear t-shirts that just have amazing art on them, you don’t have to wear a logo.

TH: There are countless ongoing tshirt design contests these days. Yet none of them have achieved anywhere near the success of Threadless. What do you think the key elements of success for Threadless were? Surely it has to be more than simply being in the right place at the right time or even seeing the opportunity in striking a balance between good business and a strong community?
JN: I started Threadless as a hobby, not a business. The software we’ve developed could really be made by anyone… but building the community that Threadless has become is not easy. It grew very slowly and organically over the past 10 years. And it grew because there is such sincerity between the company and the community and between members of the community themselves… we are truly fueled by creating cool stuff with artists around the world, not by dollar signs. But we have also been very realistic when it comes to revenue. We bootstrapped the company with $1000 and have only grown it with our own profits, so something has to really actually be working in order for us to keep moving. 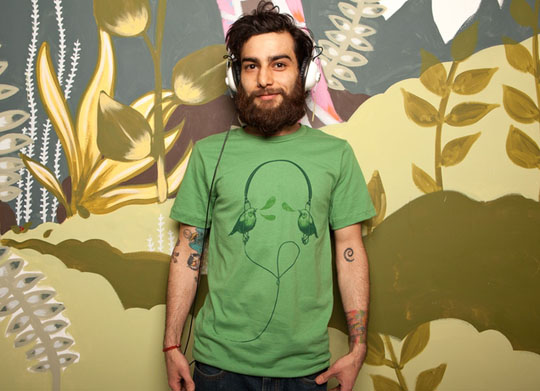 TH: Threadless has given a fair few designers their big break and led them to their own success beyond the contest (for example Glen of Glennz), how does that feel for you?
JN: I love that, I feel like that is the ultimate outcome of Threadless – to help artists jump start their careers, gain the confidence to build their style, get their work out there and, in a way, find themselves… It’s a nice stepping stone because it allows artists to dive into a more commercial art world but without sacrificing their integrity as an artist because they are still creating the work for themselves rather than to the spec of a client.

TH: Do you have any favourite artists and / or tshirt designs out of the many you have released over the years?
JN: My all time favorite is a design titled “Upso” by Dustin Hostetler. That said, I get new favorites every week! … I tend to enjoy the weird stuff a little more than most… One of my favorite artists is Ken who designed “My Little Pony” (pictured below) 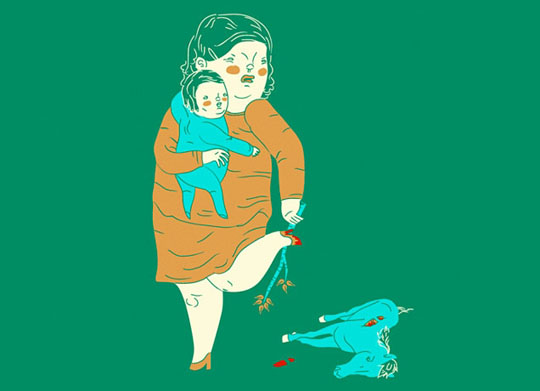 TH: What are the key elements to managing a community the size of Threadless’?
JN: Be real, transparent, sincere … be truly interested in the community and be yourself within it. Don’t bother if you aren’t passionate about the topic yourself. But really I think the biggest thing you can do is listen and show that you are listening by making changes in response to issues that are brought up. That is so powerful.

TH: There is always talk of Threadless’ notable successes over the years (and they are numerous) however have there been any points where things weren’t going so well or you encountered difficulties and how did you overcome them?
JN: Early on we had a lot of accounting and other operational weaknesses. We just rolled with the punches, never getting so discouraged that we stopped moving. Just keep pushing forward and you’ll get past the problems eventually. Luckily my wife took over operations early on and got things all cleaned up… and our operations team now kicks ass. Lately we’ve been wanting to do a lot more than we are physically able to do so that can be frustrating. Personally I’ve been working really hard lately to maintain our small, scrappy, quick working style as we grow because that can be a huge challenge.

TH: Your latest product line, Select, has been receiving favourable write-ups from the press and enjoying frequent product sell outs. What inspired the creation of this higher quality, almost boutique sub-label (that isn’t subject to the traditional Threadless voting process)?
JN: Thanks! We first did a partnership with Gilt Groupe a few months ago in which we created a line of Threadless-inspired products specifically for them. Ross Zietz, our product creative director, and designer of many winning Threadless tees, came up with the line. It did so well that we decided to keep with it. We made some tweaks and out came Select (see image below for an example). It’s been a huge success – we hope to be able to source designs specifically for it soon (rather than repurposing existing designs). 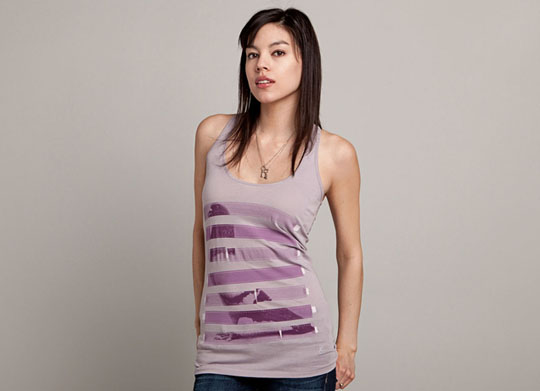 TH: You frequently run design contests to support and benefit charities and organizations – why is this important for Threadless and will it see continued development from the company?
JN: Yea, we just recently launched Threadless Causes – we started out doing relief tees back when Hurricane Katrina struck and we have been doing them regularly since them. With the Causes launch, we are now able to do cause related tees for anything, not just for disaster relief. This is really important to me personally, t-shirts make such a great fundraising tool, our community is super into designing for a cause and it’s just a win win win win for everyone … We plan to do new cause challenges regularly. We’ve already done 5 since February and there are dozens more in the works over the next year.

TH: In what way has the model of printing limited runs and then requiring a certain number of reprint requests before a new run is produced been an important element in Threadless’ successful growth?
JN: It’s been working out really great. Even though each tee usually has no problem selling out an initial run, we do still have designs that do better than others. It works out nicely as a way to test a design, make sure the score translated to sales and if it does, keep printing it. It’s also a neat way for the designs that don’t do super well the first time around to stay limited edition and small… you never really know if a design will get a 2nd run so it’s good to grab it right away if you really like it.

TH: In 2007 you expanded into the offline world of retail, is this an area you would like to continue to expand into, continuing to convert that well-liked quirky Threadless vibe into an engaging retail experience for customers?
JN: Yea probably. Though we probably won’t do it all ourselves. We built that store as an experiment to see how much of the story of each tee we could tell in a retail setting… and to see how much of the community on the website can be replicated offline. At first we thought maybe we’d expand into other cities but now we feel like much of that can be integrated into existing stores so long as we have things that tell the story as part of the deal. It’s taken us a very long time to really figure out offline retail as we are being super careful about it but I think we’ve found the answer and hopefully we can find some partners to help us implement it. 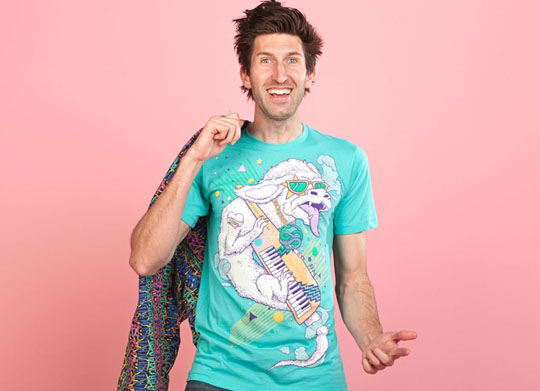 TH: How important has the regular addition of new product lines such as Threadless Kids, been to the continued growth of the brand?
JN: None of our new product lines have had a huge impact on our growth quite yet, but we do think that they still all have a ton of potential and we are working hard to grow them. We’ve been working real hard on figuring out ways to partner with other companies on new lines of products like we have done with Thermos, Griffin, Dell, Havianas, etc and right now I think that those types of partnerships are going to be the real key to growing Threadless. We’re working hard to bring community based design to other industries, breaking out of just the t-shirt and we’re well on our way to doing so! This has me super excited. I love seeing the community tackle a new challenge … the Steven Alan pattern design challenge we ran recently ended up with some really amazing pattern designs.

TH: Can you see Threadless moving further into more archetypally fashionable territory in the future with more focus on Select style garments?
JN: Yea, I think that’s going to be one of our efforts in breaking out of just the t-shirt … other types of apparel. Coming out of the Steven Alan challenge, and after our experiment with Naked & Angry we are feeling like we could do a lot more with patterns and that they can be used for a much broader range of fashion-based products. So yea, definitely going to be keep moving in that direction!

Thank you to Jake for his inciteful answers and what else can be said, other than head over the Threadless and vote/shop to your heart’s content?

Top Tee! Threadless' "Plenty Of fish In The C" Tshirt